Sie haben JavaScript deaktiviert! subTOURING | Liverpool | Get the most music out of your trip. Follow your band.

Birthplace of The Beatles

Liverpool, home to the Fab Four and the Mersey Beat movement. A city which lives and breathes music. Awarded for its extraordinary musical heritage. Step into its lively music scene - one to be proud of. 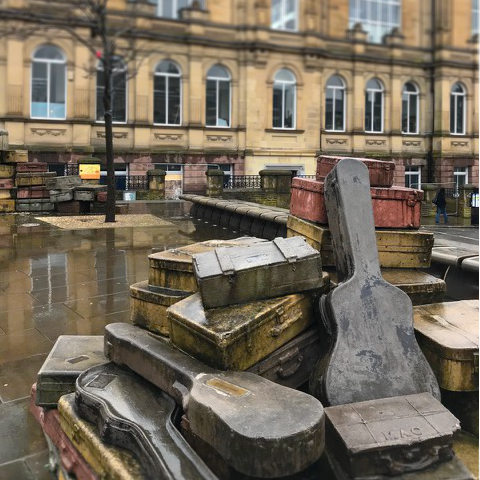 Musical heart of Liverpool (part one)

Check out the vibrant heart of Liverpool with all of its musical abundance. Reveal some Rock history story behind these city's walls. Combine interesting sightseeing spots with tons of record stores. After browsing the shelfs, check out some bars and venues for tonight. 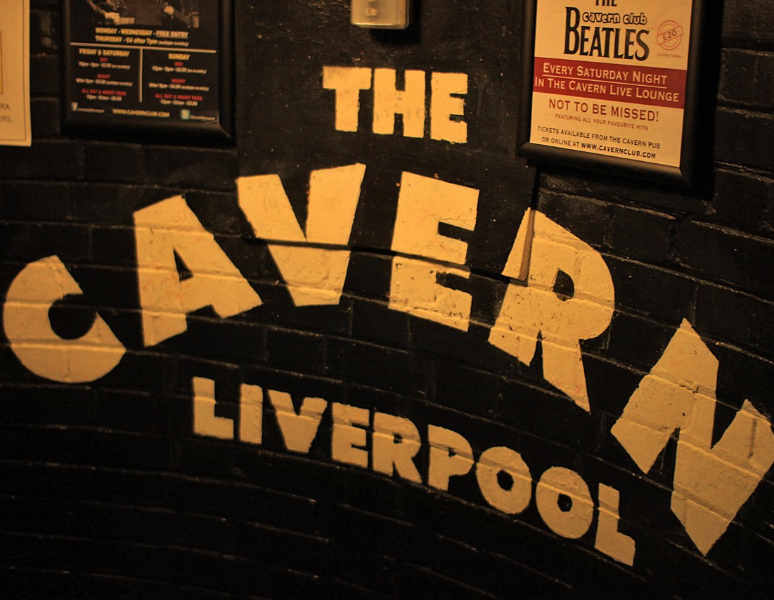 One of the most famous live music venues and night clubs in the world. Also birthplace to legendary Beatles. Nowadays, a must-visit when in Liverpool.

Penny Lane is in my ears and in my mind... This street is as unobtrusive as famous: Penny Lane. Many Beatles' songs deal about their Liverpool childhood memories. So does this song released in 1967.

Most of the places mentioned in the song are still around, such as the barber's shop, the bus shelter in the middle of the roundabout, the bank, and the fire station. Also around is St Barnabas Church, where Paul was once a choirboy and where his brother Mike got married in May 1982.

As the famous street signs repeatedly had been stolen by fans from all over the world, the city of Liverpool decided to paint some of them on the brick walls instead.

If you haven't been here before, you surely would expect something else. Strawberry Field is the name of a building in Liverpool neighbourhood of Woolton. The Salvation Army provided a orphanage in here which was opened on 7 July 1936. Originally a huge Victorian mansion, it was demolished and replaced by a smaller building in the early 70s.

During his childhood, John Lennon often came here to play on the site with his friends as it was just a short distance from his Mendips home. In 1967, the place became world-famous when the Beatles' song Strawberry Fields Forever was released.

The children’s home was closed in 2005 with the famous gates been removed to prevent any further damage to them. They were replaced by exact replicas in 2011 - still shining in brightest fire red.

The Beatles in their immortal bronze versions of more than 2 metres height. Check out an interesting detail: John Lennon's statue holds two acorns in his right hand. Why this? It was his habit to hand over a handful of acorns as a gift to politicians as a symbol for peace.

subTOURING isn’t about mainstream sightseeing. It is travelling inspired by music. A hand-picked guide from passionate music lovers for enthusiasts of Rock, Indie, Metal, and Punk tunes. Offering a unique music travel experience in Liverpool.

Get your authentic music experience in and around Liverpool. 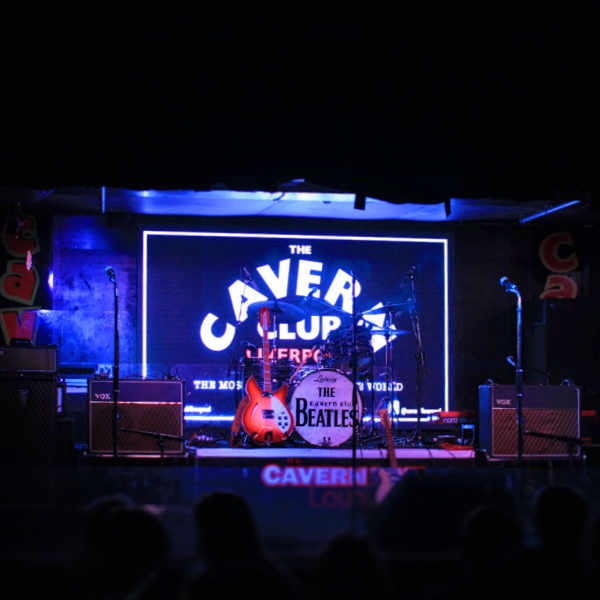 Up for a weekend trip with concert in Liverpool? Check out the venue city guides focussing on before and after the concert. Get our best tips for accommodation and day activities including record stores as well as bars and restaurants.

In Liverpool, follow the traces of the Beatles and the Mersey Beat movement. Find out how the city’s location as seaport laid foundation for mingling global influences to form new music genres. Enjoy unforgettable nights in numerous live music venues. And be thrilled by the outstanding atmosphere.

Musical heart of Liverpool (part one)

Check out the vibrant heart of Liverpool with all of its musical abundance. Reveal some Rock history story behind these city's walls. Combine interesting sightseeing spots with tons of record stores. After browsing the shelfs, check out some bars and venues for tonight.

A perfect afternoon stroll combining casual dining options with vinyl shopping. On your way to some impressive musicians' statues, check out venues and bars for tonight. Final destination of this walk is famous Cavern Club, legendary Beatles venue.

It's an impressive subTOUR taking you to places all about the early days of the Beatles. Learn about their birthplaces and childhood homes. Stroll along famous Penny Lane and take a picture at Strawberry Field. Take a bike or the bus for this tour or join an official tour operator.

This subTOUR will guide you along famous Liverpool Waterfront. Take your time inside the world-class Beatles & British Music museums and stroll to the Beatles statue at Pier Head. Yes, there are definitely numerous music icons on this walk's list.

You'll never walk alone - this is Liverpool, Anfield Road. Where football has a home. Afterwards, visit the world-famous Casbah Coffee Club, where Beatles history has been written. This subTOUR can be done as bike trip or by bus.

Music has always been crucial to Liverpool’s culture and identity. The city at River Mersey is heavily influenced by its seaport heritage. A place where all kinds of music are celebrated equally and cross-genre activity is standard. The pulsing live music scene takes place in huge venues and intimate ones alike.

Get your authentic music experience in and around Liverpool with subTOURING.

Use the map to discover the venues in Liverpool with surrounding places to enjoy before and after the gig.

Music is and always has been essential to Liverpool.

To see world-class acts, head to Echo Arena at the River Mersey bank. If you’re more into something special, why not spend the evening at Philharmonic Hall with its unique atmosphere. And last but not least, legendary Cavern Club offers small live acts as well as sensational cover performances commemorating The Beatles heritage.

Step inside this place of good old music

Offering a great range of vinyls

Selling all the best in new and used vinyl

The Beatles all over the place

Blues and Jazz go together with whiskey and gin

Famous club back in the 60s connected to the Beatles history

Today pub, former rehearsal and concert space for the Beatles

A bar for great food and drinks featuring a small venue

A welcoming place when in Woolton

A welcoming pub with a Beatles history to tell

Known from the cover of Ringo Starr's first solo album

Rock and Metal for the harder lads and girls

Maybe you meet some famous musicians

Everything from the Fab Four you can imagine

Blast From The Past

Band shirts, Metal shirts, and Rock shirts all over the place

City of music with extraordinary heritage

Liverpool, Merseyside, has a long tradition of music from various genres such as Classical, Punk and Pop. Known also globally for its musical heritage, the city has been recognised by Guinness World Records as the World Capital City of Pop in 2001. Why so? Musicians from Liverpool have produced numerous number one hits - until today, far more than artists from any other city in the world.

Liverpool is probably most famous as birthplace of The Beatles who played many of their early gigs at the Casbah and the Cavern Club. During the 60s, the city at the Mersey River was at the forefront of the Beat Music movement and also home to renowned music magazine Mersey Beat. Many notable acts came up during that time, including Billy J Kramer, Cilla Black, and Gerry and the Pacemakers.

The Beatles were formed in 1960. First focussing on Beat and 50s Rock ’n’ Roll, later experimenting with several musical styles such as Psychedelic Rock. They built their reputation playing night clubs in Liverpool and Hamburg, with Stuart Sutcliffe as initial bass player and Pete Best as drummer. It was manager Brian Epstein who formed the band into a professional act. Beatlemania grew in Britain, and in 1964, they became international stars acquiring the nickname The Fab Four. With final members John Lennon, Paul McCartney, George Harrison, and Ringo Starr, The Beatles became widely regarded as one of the most influential music bands ever.

In the late 1970s and early 1980s, a scene influenced by Punk, Post Punk, and Experimental music emerged, followed by the 90s Dance movement. Other renowned musicians from Liverpool since then include Frankie Goes to Hollywood, The Zutons, Circa Waves, Carcass, The Lightning Seeds, or The Wombats.

Liverpool has and always had an extraordinary music culture, with a rich mixture of sounds and influences deriving from people from many different places settling in the seaport. The result is an unparalleled openness to new music genres and a huge amount of live venues, clubs, and festivals.

Even UNESCO has recognized the city’s musical heritage designating it a permanent UNESCO City of Music. The title has been awarded due to Liverpool’s rich contemporary music culture, including educational studies such as offered by Liverpool Institute for Performing Arts.